USB hubs are normally used where there are insufficient USB ports available and expansion is required. USB is an acronym for Universal Serial Bus. The USB interface was developed to allow a huge variety of devices to connect to a host computer via a standard socket and to permit "hot swapping". Hot swapping simply means that devices can be connected or disconnected without the inconvenience of rebooting the computer, or powering off the plug-in device. The interface also supplies a limited amount of power, sufficient to allow low power devices to operate without any other power source. Externally powered USB Hubs can be used where several devices are drawing power (see below). Lastly, for many peripherals, USB allows true "plug and play" without the requirement to load 3rd party device drivers. USB has largely replaced parallel and serial ports and many people now use USB keyboards and mice rather than plugging into dedicated sockets for these devices. 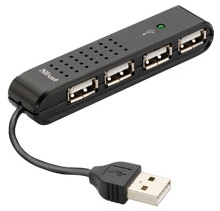 Most computers have several in-built USB Ports. With the modern trend to make peripheral components with a USB interface, the onboard USB ports can rapidly fill up leaving none spare for future expansion. The mini-ITX boards most commonly used for carputers typically have fewer onboard USB sockets than desktop models, so are more quickly fully utilised.

Fortunately, USB is an expandable interface, and the simple act of plugging in a USB hub will expand the number of sockets available. A hub simply allows multiple plugs to be connected to one socket. This also means you are able to have the sockets where you need them, and are not restricted to the vicinity of the PC case.


Although USB hubs can be "daisy-chained" to support up to 127 devices, some devices receive their power through the USB socket, so where a large number of hubs are connected together, it is unlikely the motherboard would be able to supply the required amount of power. With a desktop PC, the normal answer in these circumstances is to use a powered USB hub. This is less straighforward with a car PC. If you opt to go down this route, you will need to take a 5v supply from a spare Molex connector at the power supply. An additional in-line fuse should be added for safety.

USB 3.0 offers a further 10 fold increase in theoretical speed, with the first few bits of hardware to offer the new specification released at the end of 2009. However early adopters, as ever, will have to dig deep in their pockets. Given that it will take some time before there are a significant number of peripherals available with USB 3, the recommendation just now is to stick with USB 2 until the price and availability of equipment comes down. In common with the v2.0 and V1.1, USB 3.0 is backward compatible with earlier versions.

For the odd power hungry USB peripheral, the Dr Bott T3 Hub may be an alternative to a powered hub, as long as the total load is not over 500mA.