Until 2008, the only real contender for a combination of Motherboard and processor with a low power consumption, and also importantly, low heat generation, was Via's range of Mini-ITX mother boards. These boards are designed to use a minimum amount of power, whilst still being able to run the same software as their desktop counterparts. The downside is that the processors are not particularly powerful or fast. However, so long as you can survive without being able to run applications requiring cutting edge graphics processing, these mother boards are fast and powerful enough for a car PC. The boards are sold with the processor soldered in place, so there is no upgrade route.

If you are really tight for space and need to use the smallest possible size of main board, you can consider Via's Pico-ITX boards. 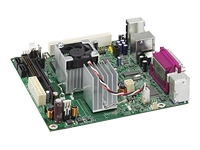 In spring 2008, Intel released a new processor called the "Atom". This had an architecture which had been designed with a very low power usage. It was designed for mobile applications of all types, including hand held devices. One of the intended uses was low power consumption PC's.

The processor only consumes about 4 watts, however the chipsets in the Atom Motherboards which Intel released, have an older design and are not so frugal in terms of power requirements.

Even so, combined power drawn by the processor and motherboard combination under "no load" conditions, is comparable with the Via motherboards. Unlike the Via boards, putting the board under load makes very little difference to power consumption.

The introduction of a dual core version later in 2008 improved performance and made this board a very attractive low cost proposition. This is an increasingly popular platform for carputers.