In the late 1970's and early 1980's, manufacturers made increasing use of electronic systems in cars, particularly for engine control systems and fault diagnosis. This was partly due to the increasingly widespread use of electronics in all consumer goods, but also due to the ever tightening emission regulations. Diagnostic systems have gone through significant changes since their introduction, and in the 1990's OBD-II was rolled out, giving diagnostic information on not only the engine, fuel and emission systems, but also some body, chassis, and transmission functions.


By law, all cars built in the USA had to be compliant by 1996. In Europe, introduction was more gradual. It was not fully implemented until 1st January 2001 for petrol engined cars and 1st January 2004 for diesel engined cars. By clicking HERE, you can find out if your car is OBD2 compliant, and where the connector is likely to be. 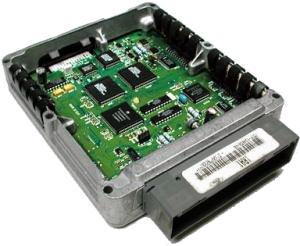 All modern vehicles are controlled by a computer or ECM (Engine Control Module). This ensures the engine and transmission run efficiently and exhaust emissions are kept within the permitted ranges.


Emission regulations together with soaring fuel costs, make it vital to run as efficiently as possible. Engine settings need to be continually monitored and adjusted to account for many variables including temperature, speed, altitude and road surface.


That is why modern vehicles contain so many more electronic components than the vehicles of yesteryear. No human driver would be able to make the instantaneous setting changes, required for the vehicle to run at optimum efficiency. Instead, there are a variety of sensors which send signals to the ECM. The ECM monitors these signals and makes adjustments to dozens of parameters such as ignition timing and fuel injection settings.


There are two oxygen sensors fitted to the exhaust system. The primary sensor is fitted before the catalytic convertor, and the secondary sensor is fitted after it. The primary sensor measures the cylinder combustion efficiency. The signals are fed back to the ECM which then makes adjustments to the fuel/air mixture to keep emissions low. The secondary sensor measures the efficiency of the catalytic converter.

A variety of MIL display


If the ECM detects any sensor signal outwith normal values, it records a fault code or DTC (Diagnostic Trouble Code) in its memory, and switches on the MIL (Malfunction Indicator Lamp). There are various actual forms this indicator can take, and a some of them are shown on the right.

Have you ever noticed how computer and technology companies love to use TLA's? (Three Letter Acronyms)


If the light comes on, one thing is for sure, there is a fault. Unfortunately, knowing that is not very helpful because of the huge range of possible faults. There are literally hundreds of possible fault codes, some more serious than others. For example, a fuel cap which has not been properly closed can cause the MIL to come on. If the light comes on, don't panic! Check HERE for a list of do's and don'ts. 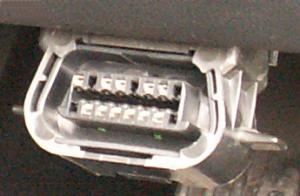 The fault code has to be retrieved by plugging a scanning tool into the OBD2 socket similar to the one shown on the left. This can be done by taking your car to a repair shop and paying for them to plug in their scanner.

Alternatively, you could buy your own scanner.

You can now buy a multitude of OBD2 scanners. Many types of scanning tools are available, from simple cheap hand held meters which display fault codes and little else, to professional console units with their own dedicated computer, where the cost will run well into four figures. It is possible to buy an inexpensive unit which plugs into a PC. This could be a laptop or a handheld computer. However, it is much more convenient to have a scanner permanently in place and connected to a carputer. A scanner connected to a carputer will not only enable you to see fault codes as soon as the MIL light goes on, it also gives you the opportunity to display information about running conditions as you drive.


The fault code itself does not identify the faulty component. It highlights the problem area and further testing may be required to find the root cause of the fault.


Where Do I Buy a Scanner? 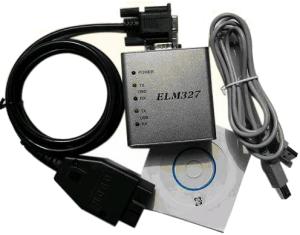 Firstly go for a tool with a USB connection rather than a serial version. Increasingly, manufacturers are building motherboards with no onboard serial port.

The Allpro OBD2 adapter is an adapter which real DIY electronics enthusiasts who are happiest with a soldering iron in their hands, can build themselves.

What should I do if the MIL comes on? and other Frequently Asked Questions about OBD2

How Fault codes are derived is explained here. Each character in the code is meaningful.

If you are running your carputer with a frontend, many of these have built-in provision to display information from your OBD2 interface. If you are not using a front end, or prefer to use a standalone software package, you can try packages such as