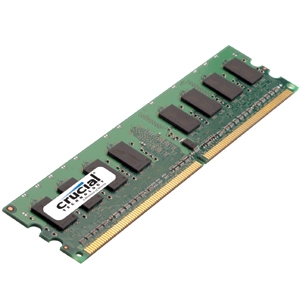 Most mini-ITX boards only have one memory slot, so there is only one chance to get your carputer memory right since you cannot add a second module at a later date. It is therefore advisable to go for the largest capacity module you think you will need, and for which the slot is designed. Buy a reputable brand and try to use a module which has been proven to be compatible with your motherboard. Check this at the memory manufacturer's web site.

Personally, when I fit memory, I always use the Crucial brand. I've never had to return a module because it was incompatibile with the motherboard. I have however had compatibility issues using cheaper generic memory modules.

The Crucial Memory Advisor Tool takes the guesswork out of your carputer memory selection.

The other thing to check carefully is the physical size of the memory module. This can vary between manufacturers. (The length is fixed due to the design of the motherboard slot, but not the height). Some mini-ITX cases have very little space inside and this may limit the height of the module you can use for your carputer memory.

If you use a memory selection tool such as the one shown above, you don't need to know anything about the different types of memory. Just use the tool to select the best carputer memory for your installation. However, if you're anything like me, blessed (or cursed) with the need to understand the details, read on.

DRAM (Dynamic Random Access Memory) is essential to the operation of PC's. The memory provides a temporary home for data whilst the processor is working with the data. The operating system has a minimum recommended memory size for proper operation. However, only installing the minimum amount of memory is in effect strangling the system. If there is insufficient memory, the system will "swap" data in and out of memory as required, by writing a temporary file to the hard disk. Apart from the additional noise this creates, it greatly diminishes system speed and can reduce the lifespan of the hard disk.

Since memory is relatively cheap, I always recommend you install as much carputer memory as the motherboard (or the operating system) will support. 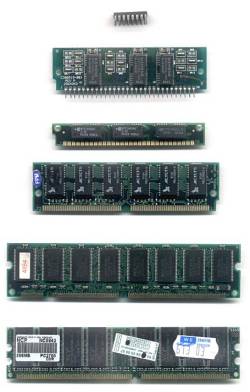 Each new generation has generally heralded an increase in speed and capacity, along with a reduction in operating voltage, meaning reduced power consumption and lower heat emission. Even the DIMM's we use today are constantly changing. The first variant to be released although originally termed simply a DIMM, is now referred to as an SDR (Single Data Rate) DIMM.

The Single Data Rate description was added after the release of DDR (Double Data Rate) DIMM's. As you would expect, a double data rate module achieves twice the data transfer rate as a single data rate module, for a given operating frequency. DDR modules are not backward compatible. The number of pins were increased, and the operating voltage was dropped from 3.3v to 2.5v

The original DDR specification in turn was superseded by the release of DDR2, which is the most common type of memory module in current use. The next generation, DDR3 is already with us, however DDR3 sales are not forecast to overtake DDR2 before 2010, as chipsets and architectures gradually move over to the newer technology. Currently, DDR4 modules which were announced in 2008 are not forecast for release before 2011/2012.